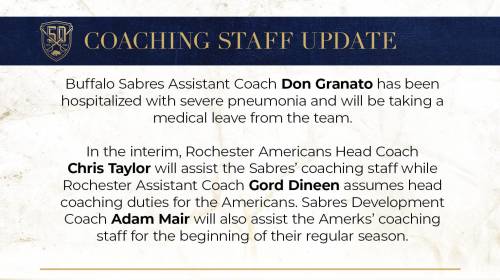 Buffalo Sabres Assistant Coach Don Granato has been hospitalized with severe pneumonia and will be taking a medical leave from the team.

A former Sabres forward, Mair rejoins the organization after spending the last 18 months as a coach with the Academy of Hockey at HARBORCENTER, where he was responsible for educating aspiring hockey players and coaches both on and off the ice through clinics, on-ice instruction and classroom teaching. Before joining the Academy of Hockey staff, Mair began his coaching career in 2012-13 as director of player development for Canisius College.

Prior to his coaching career, Mair spent 12 seasons as a forward in the NHL, appearing in 615 games. In addition to his seven seasons and nearly 500 games with the Sabres, he also played for the Toronto Maple Leafs and the Los Angeles Kings, and finished his NHL career in 2010-11 as a member of the New Jersey Devils.

Barch will begin his post-playing career with the Sabres after spending eight seasons and 381 games in the NHL as a forward for the Dallas Stars, Florida Panthers and New Jersey Devils.